Ovarian failure is a cruel fact to me. Fortunately, egg donation for the recipient is legal in Taiwan; fortunately, we came to the Stork Fertility Center. We finally don't have to find other fertility centers.
Patient Testimonial
Sperm and Egg Bank
Consultation
2021-05-21
Author: 客戶分享
Translator: Kathleen

My husband and I had taken an egg recipient program at Stork Fertility Center. We were lucky to get pregnant at the first implantation and gave birth to a healthy baby. There is only infinite gratitude in my heart. From the initial consultation, pairing an egg donor, embryo implantation, to pregnancy, I am very grateful for the support and encouragement given by Stork on this road of child-seeking.

For us, the egg recipient program is the best way. However, it was an impossible thing that could happen in Japan. We have faced many difficulties and overcame them. Finally, we were really grateful that we arrived in Taiwan and chose the Stork Fertility Center.

In Japan, the number of couples receiving infertility treatment is increasing year by year, and my husband and I are one of them. We are a 40-year-old Japanese couple, and we always fail and stumble all the way. The result of treatment is only a waste of time and money. At that time, even if there was only a little possibility, as long as we saw the hope, we would be willing to try it. We spent several years in many different highly rated centers of Tokyo back and forth. Finally, I chose a center in Tokyo called "the last mile." This fertility center began to line up at six o'clock in the morning. We could know the couples there strongly showing their serious attitude toward “getting pregnant”.

After that, I competed with time, raised the expenses of treatment, and at the same time battled the pain caused by treatment failure. We are well aware that every fertility  center has tried its best to help us, but the results are not satisfactory. Even if the embryo is implanted, it has no heartbeats. Even if I changed a reproductive center, a doctor, or an embryologist, the results of the treatment were the same. It did disappoint me. However, the reason for the treatment failure was the cruel reality that I, who already reached 40, could not deny: Ovarian failure.

"It is impossible for aging eggs to rejuvenate. I even thought that it would be great if I froze eggs at 20, but I didn't."

After giving up the birth of a child from my eggs, we considered adopting or taking the egg recipient program in the next step. I have collected all kinds of information shared in blogs and forums for further research. As Japanese, it is very difficult to take the egg recipient program abroad, but thanks to the information shared by netizens, many leading netizens have shared very valuable information. Although the experience and opinions of these anonymous people are a bit dubious, it is impossible to consult relatives or friends around you in real life in Japan on this sensitive topic.

After searching on the Internet, I learned that Taiwan, the United States, Thailand, Spain and other countries offer the egg recipient program, and I began to study various reproductive centers in depth to compare them. After comparisons, I got in touch with several reproductive centers in various countries, and finally after the actual visit, I decided to entrust Stork Fertility Center. After we are fully awakened, what is waiting for us next is distance. In order to seek IVF treatment in Taiwan, we must fly from Japan to Taiwan. In addition, not only medical expenses, but also air tickets, accommodation and meals have greatly increased expenses. We also need to find a hospital in Japan that can assist in the examination.

There are many difficulties and obstacles during infertility treatment, and we must break them through. Whether it is mentally or physically, it is a great pressure for me at 40 years old. But, the most important thing is that I didn't give up and persisted till the end, which is really great! 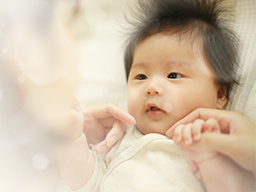