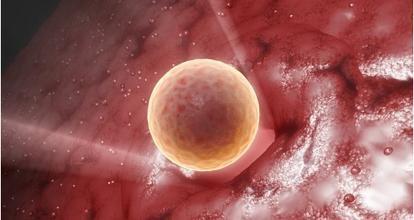 Have you ever heard the phrase of personalized precision IVF?
Nowadays, the individualized medication is more prevalent.

Embryo implantation is a highly complex process incorporating with a healthy embryo, a receptive endometrium, and a molecularly communicative dialogue in between. Until 2016, Stork Fertility Center has comprehensive applied individualized COS, IMSI/ICSI, blastocyst culture, PGS/PGD, donor gametes, and frozen embryo transfer for the cases with specific indications. Moreover, all patients would be requested to take the hysteroscopy, hysterosalpingograrphy, and cervical bacteria culture before entering the transfer cycle. However, still, some patients failed after couples of transfers.
Why?
Except for the quality of embryos and the physically normal observation of uterus and endometrium (EM) through ultrasound, a hidden culprit must exist in between—the dialogue for permitting implantation. Actually, the human endometrium is a dynamic tissue, which undergoes changes during multiple levels in a menstrual cycle. The changes in histological markers, biochemical markers, molecular markers, and transcriptomics (Omics) have been reported in the previous articles. Generally, the period of EM receptivity is known as the "window of implantation, WOI," which opens during the cycle day 19 or 20 and remains open for 4-5 days. During WOI, the EM becomes functionally competent for the embryo implantation.

Through examining these transcriptomes in EM biopsies from different people, several studies found that the WOI is not fixed, as was believed before. It means that a fixed transfer protocol to all the patients could not be applicable. Thus several clinical approaches for detecting the receptivity of EM tissue were developed recently, and the endometrium receptivity array (ERA) was one of them. The ERA was used to analyzed the expression of 238 genes in an EM biopsy obtained from either an HRT or natural cycle. After priming of progesterone in an HRT or of LH in a natural cycle, the EM would be biopsied and analyzed. If the result showed receptive, transferring embryo at the same time in another cycle would be recommended. If the result showed non-receptive, transferring time would be adjusted according to the expressions of pre- or post-receptivity.

Based on the clinical trial of IGENOMIX, a leading team of reproductive genetics in Spain, around 30% in the population had a WOI which is not located in the general frame (P+5 or LH+7), and four-fifths of these non-receptive are pre-receptive (80%). The introduction of ERA has been reported to solve the problem in part of patients suffering from repeated implantation failure, and thus to increase the success rate in IVF. 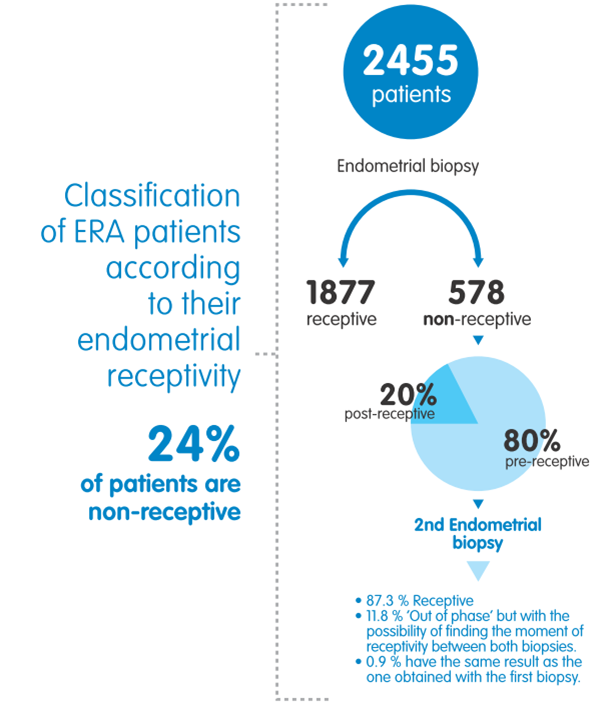 At Stork Fertility Center, the indications for ERA is as below:

The pregnancy rate of transferring a good blastocyst with PGS+ERA can reach 80%. On the other hand, 10~20% increase compared to those with PGS, only 60~70%. This is the Third generation IVF Plus: “precise selection + precise implantation”.